‘Passport to Shine’ was Tourism Queensland’s global brand campaign that celebrated the launch of the State’s new branding and positioning statement, ‘Queensland, Where Australia Shines’.

Tourism Queensland’s overarching goal to spread the ‘Shine’ around the world resulted in the decision to look to Facebook as the distribution channel for this campaign. This was supported by a $100,000 Queensland prize for the ultimate winner of the competition.

An innovative global social media campaign that outperformed all KPIs and was highly shared, including increasing Facebook ‘Likes’ by 746%. 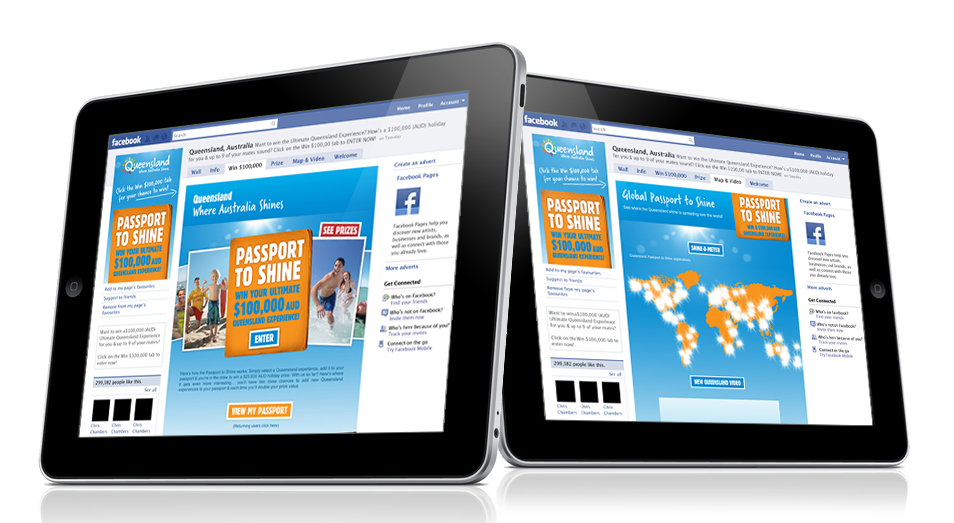 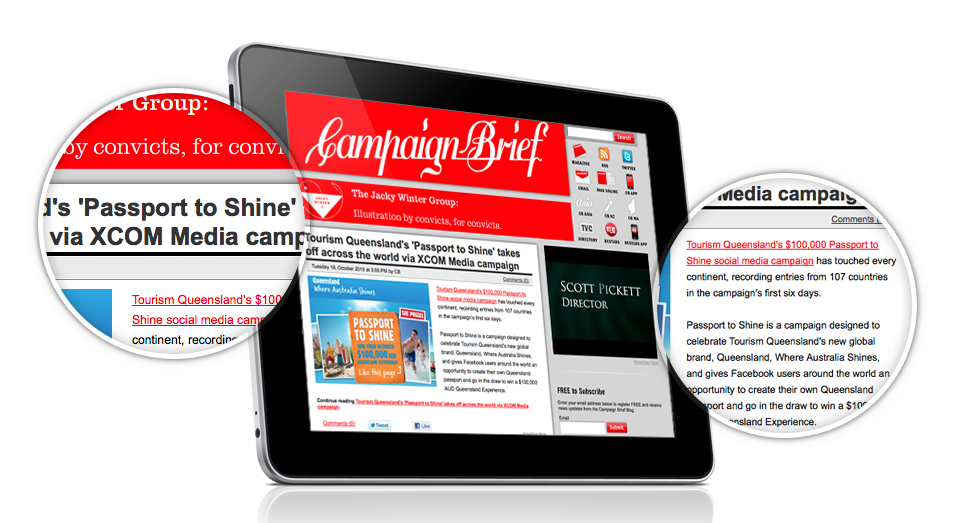 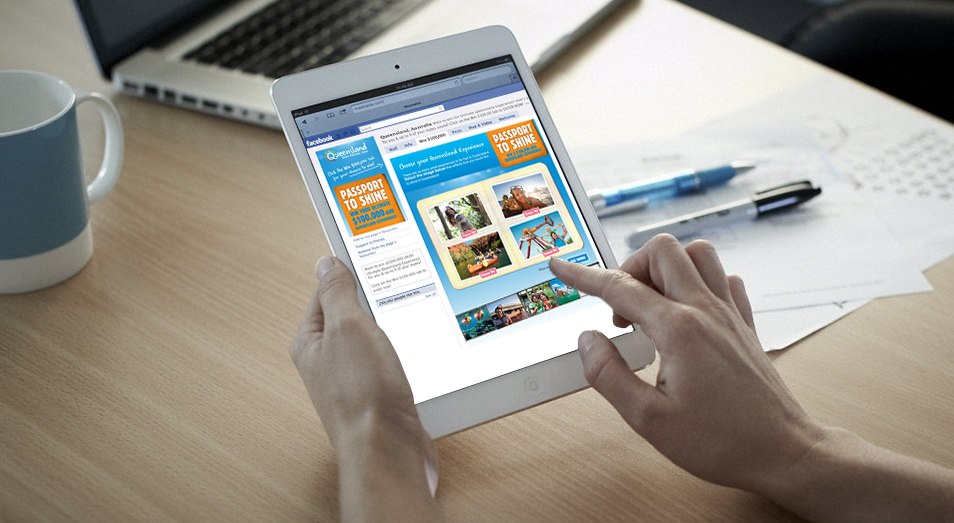 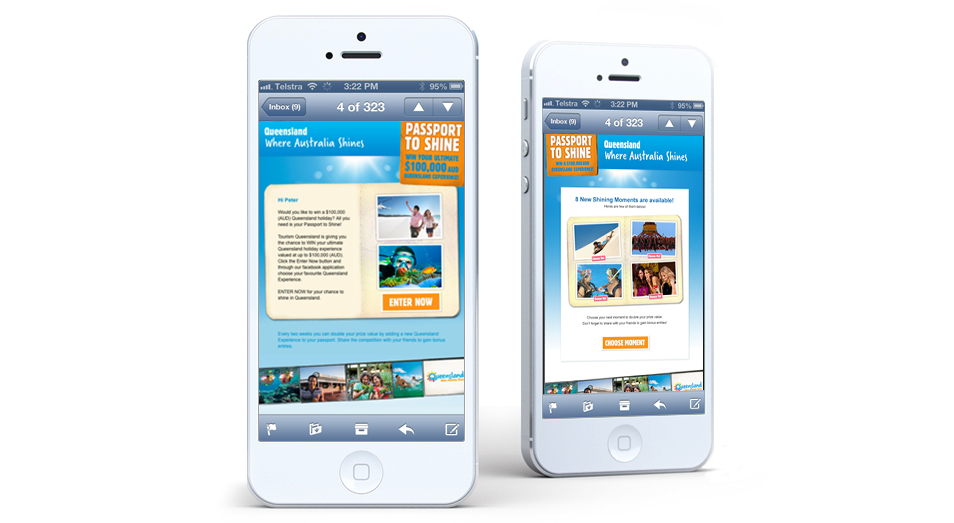 ‘Passport to Shine’ was Tourism Queensland’s global brand campaign that celebrated the launch of the State’s new branding and positioning statement, ‘Queensland, Where Australia Shines’.

Tourism Queensland’s overarching goal to spread the ‘Shine’ around the world resulted in the decision to look to Facebook as the distribution channel for this campaign. This was supported by a $100,000 Queensland prize for the ultimate winner of the competition.

The idea was to create a campaign that distributed Tourism Queensland’s new brand globally while encouraging users to return multiple times throughout the campaign period.

Worldwide Facebook audience, especially to people who already had an interest and affiliation with Australia or Queensland. Key foreign markets included the UK, USA, NZ and Malaysia.

The campaign needed to be global in nature and marketed in five priority markets around the world. The key markets included the UK, USA, New Zealand, Malaysia as well as the local Australian market, with the official campaign launch occurring in the UK.

The client’s preferred channel was Facebook, due to the existing group of ‘Likes’ and the established and familiar sharing capability to a potential 500 million users of the platform worldwide. Developing in the Facebook platform allowed Tourism Queensland to talk to a global audience and leverage sharing and target the key markets with specific creative.

With page ‘Like’s’ and global sharing some of the key KPI’s, Facebook allowed Tourism Queensland to communicate directly to the key markets and generate PR activity in those regions. The campaign also aimed to acquire new email subscribers for ongoing communications after the conclusion of the campaign.

Performance of similar viral campaigns had indicated that a large percentage of campaign sharing was achieved through email, however it was believed having the campaign live within the Facebook environment would elevate this sharing through the Facebook channel. The campaign was seeded to Tourism Queensland’s existing Facebook community of over 34,000 as well as to their consumer email database, as well as being supported by PR activity at each of the local Tourism Queensland offices in the priority markets.

The campaign was six weeks in duration and with a final prize value of $100,000, which doubled from $25,000 over the campaign’s three phases, encouraging entrants to revisit three times. Each time a user returned to their virtual ‘Queensland Passport’ in a new phase they were presented with eight new images of Queensland experiences. The user would then add a new Queensland experience to their passport, which doubled their prize value.

Bonus entries were gained by sharing via Twitter and email. The campaign reach was further increased through Facebook sharing and wall posts. Geo-location technology was used to target international markets for specific weeks, presenting users with custom landing pages offering bonus prizes as incentive to enter or share the competition.

“The application was both engaging and highly shareable which meant that the Facebook platform was a perfect place for it to live. The reach the campaign achieved spread to 137 countries with over 790,000 entries which is a phenomenal result that both the client and agency should be proud of.” Paul Borrud, Australian Vice President of Facebook.

A Map and Video tab used geo-location data to plot ‘shining lights’ on a world map representing entrants’ original location and demonstrating the campaigns reach. A branded YouTube video was embedded below the map.

The competition was open to a global audience, with entries being registered from 137 countries.

The campaign was published in many of the leading news publications in Australia, UK, US, India and many other regions. The campaign also appeared on Sunrise in Australia and two TV news outlets in Tawian, and featured on blogs throughout the world.